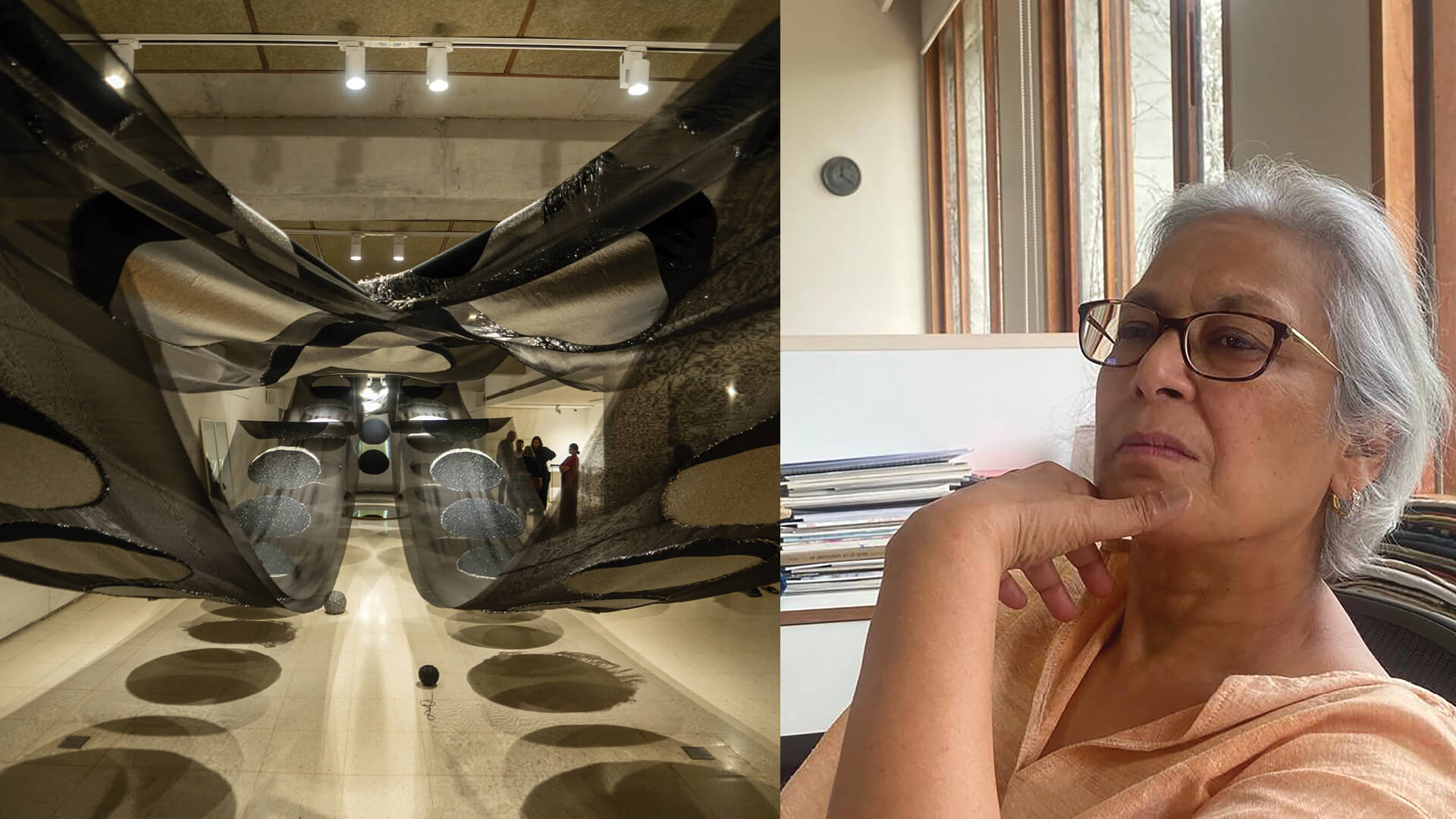 A scientific partisan for some and for others at the heart of a budding romantic relationship, the moon has always been a subject of interest among many others. Often approached as a chariot of emotions or even as a ritual symbol, the celestial body finds its expression in various contexts. Exploring the meaning of the moon in all its forms and glories, textile designer Jayshree Poddar talks to STIR about her latest exhibition, many moonsat the Bangalore International Centre, while shining the spotlight on his illustrious eponymous publication.

A seasoned weaver and design director of textile design company Himatsingka Seide Limited, Poddar has been associated with the world of textiles for over three decades. She was introduced to the art of weaving while exploring the field of ceramic for childhood design. many moons is a poetic showcase of Poddar’s love for the night orb with all its imperfections and dazzling luminosity. The sensory experience in woven silk celebrates the spiritual expression of the moon while intertwining it with the functionality and materiality of fabrics. We climb into his creative cave…

Ayushi Mathur: Can you explain to us the conceptualization of Many Moons?

Jayshree Poddar: For the concept, I used my knowledge of double weave, which is the same fabric that can split into two or more layers and within the limits of the width of the loom; I represented the three stages of the moon. The single layer represents the first full moon, which then splits into two layers and represents the changing crescent moon. Ultimately, the fabric splits into four layers to show the new full moon. Equally beautiful, the complete moon cycle is woven across the length of the loom and hangs from the gallery ceiling. So the way it moved through the gallery space, I felt there was space in the fabric and the fabric moved through the space.


Ayushi: What about the moon inspired you to explore it on an artistic level?

Jayshee: Basically, I wanted a subject that was luminous. What interested me was that the moon, as we all know, is bright, silvery, and has a regularized predictive cycle. I wondered if this reliability could also be rooted in ordinary life. We all face our challenges in life, but I believe that there is some order in this universe, whether psychological or physiological, and that same order can be felt when I observe the moon and see it. ‘Express. It was purely my love for this divine object that motivated me enough to explore it artistically.

Ayushi: The moon isn’t perfect. It is full of irregularities. How do you think irregularities can adorn jewelry for a subject of beauty?

Jayshee: Frankly, the irregularity of the moon’s surface did not appeal to me. If you look at the pictures of the moon on the net or in books, up close with all its irregularities, it is no longer attractive. As the subject of my art, I chose the distant view of the moon where it looks bright and a perfect round or crescent without any irregularities. However, I only addressed these irregularities in the course of the exhibition and not through any material. I wanted the exhibition to be experiential through the materials, the warp, the weft and the feeling.

Ayushi: How do you think the moon can impact, process and emanate emotions?

Jayshee: I just think it’s a matter of calm and acceptance. I don’t know if the moon’s surface is cool nearby, but the view from afar reflects a sense of serenity and tranquility. Alongside a sense of celebration due to its predictability and reflective qualities. Even the color silver, often associated with the moon, gives a fresh impression.

Ayushi: Can you explain to us the implementation of your work? many moons at the gallery?

Jayshee: I was familiar with the gallery space of Bangalore International Center and went ahead and wove the jacquard moon. I love woven gauze, so I used cheap silver polyester as the moon and a black sponge to highlight the parts of the moon that aren’t visible. However, before I could formulate the larger image and piece, I created the moon cycle on a smaller loom before interweaving it on the larger loom on display at BIC.

Ayushi: How was the multisensory experience designed and integrated into the show? Previously, you also had a book called many moonscould you specify the link between the two?

Jayshee: The main exhibition space, which I like to call the Main dish, was designed to be immersive. I worked with Ahmedabad-based architect Harsh Bhavsar to create a multi-sensory experience. In order to make the exhibit immersive, I included custom composed music to listen to, jasmine flowers to smell, and fabrics to feel. In the book, I used the title many moons as an interpretation of a timekeeper and guardian of the spirit, as I am told that in India a person’s lifespan can be measured by the number of full moons you see. To establish the essence of the moon in the book, I focused on interweaving it on the cover with a silver moon woven with a silk warp cover. As for the Bangalore International Center exhibition, we called it many moons simply because there were so many moons woven into the fabrics that created even more crescent and circle shadows on the floor of the gallery and hallway.


Ayushi: Is there a particular exhibit on display or in the book that spoke to you?

Jayshee: The feeling of resonance with a subject keeps changing. For the exhibition as for the book, I resonated with the moon. It’s fascinating and I love its spherical shape and the aura it carries, but in my book there are a lot of different topics that I love, including ‘wabi-sabi’, a Japanese aesthetic term for something irregular but beautiful, it makes me understand and appreciate things that deteriorate or degenerate.

Many Moons by Jayshree Poddar was presented at the Bangalore International Center from June 5-10, 2022.