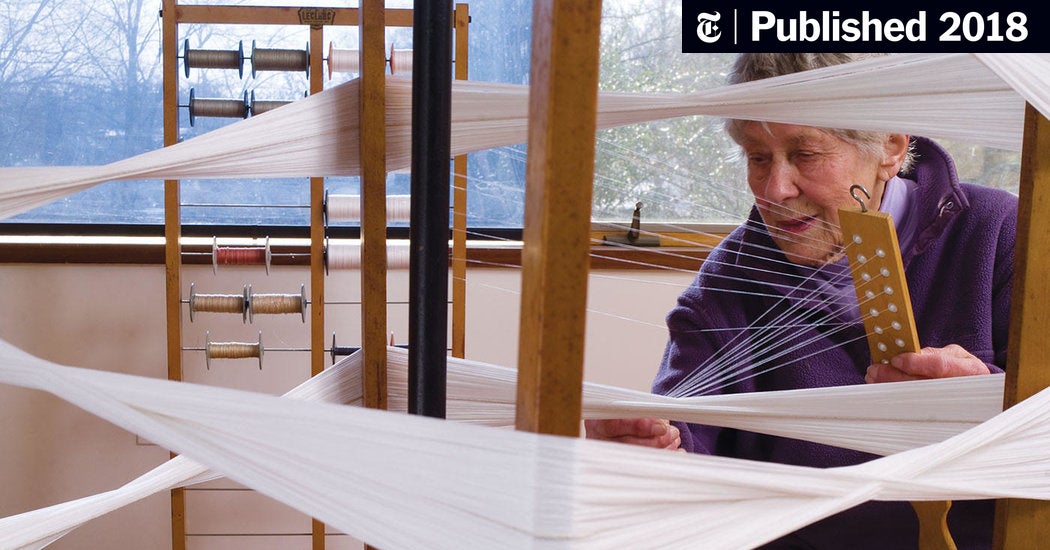 Her son, Carl, said the cause was complications from pneumonia.

Working largely out of the artistic spotlight in her Croton-on-Hudson, NY home, Ms. Stein resurrected historic weaving techniques and merged them with 20th-century Bauhaus design sensibilities.

â€œThe result was something new and deep,â€ Daniel Walker, former chair of the Art Institute of Chicago’s textiles department, said via email, â€œseemingly simple patterns based on geometry and shading, whose apparent simplicity was only made possible because of the technical complexity of the weaving, so Stein’s artistic heritage is unique.

A lighter part of his legacy came from a sideline that grew out of his penchant for reusing things others might have thrown away. She turned old socks into puppets, first for her son’s preschool and then for a growing number of fans.

She started selling them at a stand in a Manhattan department store; a monograph published by its representative, Browngrotta Arts, says she sold 10,000 of them. One ended up in the hands of a young puppeteer named Shari Lewis, who in 1953 was making a name for himself in the children’s television in the New York market. Ms. Stein, the monograph says, designed several puppets for Ms. Lewis, who would later become nationally recognized in the 1950s along with Lamb Chop, Charlie Horse and the rest of her puppet buddies.

Ethel Levy was born on June 22, 1917 in New York to Tanya Levy. Carl Stein said his mother never mentioned his father. She was raised by an aunt and uncle, Ella and Abbo Ostrowsky, and spent several years at the Hessian Hills Progressive School in Croton-on-Hudson, where teachers included painter George Biddle and sculptor Wharton Esherick. She did not attend college, but in the latter half of the 1930s she was working as an assistant at the Educational Alliance Art School in Manhattan, where Mr. Ostrowsky was principal.

There she learned from sculptor Chaim Gross, and after moving to Cambridge, Mass., In the late 1930s, she studied with Josef Albers and other associates of the Bauhaus movement. She also met her future husband, architect Richard G. Stein, who was completing his master’s degree at Harvard. After his service in World War II, they settled in Croton-on-Hudson.

Ms Stein was a sculptor early in her career but became increasingly interested in textiles, and in the 1970s her woven work took on a new level of complexity after meeting Milton Sonday, then textiles curator at Cooper Hewitt , Smithsonian Design Museum. She began to study the textiles in the museum’s collection, sometimes under a microscope, to see how they were made.

“Perhaps more than any other important textile artist of the 20th century, Ethel Stein’s work grew out of her study of historic textile techniques which she decoded to achieve extraordinary freedom of expression in her own works of art. woven, â€Lucy A. Commoner, former curator and senior curator of textiles at Cooper Hewitt, said via email.

â€œThrough years of research in textile collections from world-renowned museums,â€ added Ms. Commoner, â€œshe has made ongoing contributions to the academic study of textile structures while simultaneously informing her own work.

This work could be colorful and geometric, like his series â€œRed, Yellow, Blue, Green, Orangeâ€ from 1995. It could be monochrome, like â€œWhite Pinwheelâ€, a work from 1990 that produces a tunnel effect. It can be abstract or figurative, meticulously planned and schematized or the product of experimentation and a happy accident.

Ms. Stein’s works have been exhibited in group exhibitions at institutions such as Cooper Hewitt, the American Craft Museum in New York, the San Francisco Museum of Modern Art, the Cleveland Museum of Art, and the Metropolitan Museum of Art, as well than in England, the Netherlands and Switzerland. But she was not very well known outside the world of textile art.

â€œEthel Stein did not shun an audience; instead, she avoided the ubiquitous marketing lens of others, â€wrote Jack Lenor Larsen, a renowned textile designer and author, in the monograph’s introduction. “She would just prefer to move on to the next project.”

Ms. Stein’s husband passed away in 1990. In addition to her son, she is survived by a granddaughter.

In 2012, Ms. Stein donated 34 of her works to the Art Institute of Chicago, which in 2014 gave her, at age 96, what Mr. Walker said was his first solo exhibition. A video made for this exhibition shows her not only working on a formidable loom, but also performing the mathematical calculations necessary to make the patterns she was looking for, hand-dyeing the threads and more. Again.