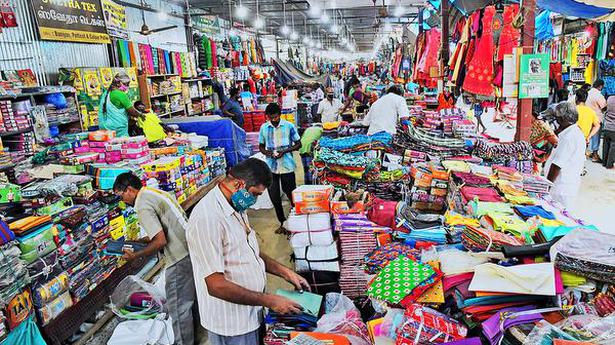 Traders start to arrive at the textile market

With the resumption of bus and train services, traders from other districts and neighboring states visited the EKM Abdul Gani Textile Market (Gani Market) here on Tuesday.

There are 370 permanent stores on the premises which operate daily while 730 stores operate Monday evening through Tuesday evening. Following the second wave of COVID-19, all stores were closed as of May 6 and reopened on July 5. However, shops were only allowed to operate until 9 p.m. and the weekly market was not allowed to operate through the night.

Traders from Andhra Pradesh and Kerala visited the weekly stores on Tuesday and placed orders while traders from across the district and other districts also visited the market. Although the expected sales did not happen, traders said the sales volume increased from last week.

S. Sakthivel, secretary, Erode Gani Market Weekly Textile Traders’ Association, said that since bus services resumed and most trains have been operated, traders have arrived at the market without a problem. “We expect sales to improve in the coming weeks,” he said, adding that Aadi’s sales had picked up in the market. Since lockdown standards were relaxed and business returned to normal in other states, sales of textiles in Maharashtra, Gujarat and West Bengal have also improved in the past two weeks.

Almost 18% of the global biomedical textiles market of US $ 17 billion will be generated from vascular transplants, heart valve repair and annuloplasty rings in 2021